Traditional Chinese medicine (in the further text – TCM) appeared 5000 years ago in the Neolithic China. During the Spring and Autumn periods (770 BC – 476 BC) and the Warring States period (475 BC – 221 BC) the theoretical foundation of TCM was created. The most important works related to TCM written during this period are:

The basic principle of TCM is a holistic one. TCM is based on prevention of disease, the unity of man and nature (天人合一), the unity of body and spirit, and the balance between Yin and Yang.

Mythology played an important role in the appearance of Chinese medical science, because at the very beginning of the development of human thought, man tried to explain secretive and mysterious phenomena by means of myth. Basic Chinese myths that are associated with the development of TCM are:

Pangu – the myth on creation: When the father of mankind Pangu came to life from the chaotic egg, he first created Yin and Yang – two basic elements of creation. Everything that exists, including human beings, is created by combining Yin and Yang.

Fuxi and Nuwa – Fuxi – the God of the Sun and Nüwa – the Goddess of the Moon are the incarnations of Yang and Yin, and they are humanity’s first parents, Chinese Adam and Eve. The universe is made of Yin and Yang. Yang originally refers to the Sun (Chinese word for the Sun is 太阳, Tai-yang, ie. The Almighty Yang) and represents a positive, active force, while Yin means a lack of the Sun (in Chinese 阴 – Yin means cloudy, in the shade, dark, hidden, the Moon) representing a negative force. The relationship between Yin and Yang is complementary and embodies opposition and unity at the same time. The theory of Yin and Yang which was developed from this concept formed the foundation of the understanding of the material world of the ancient Chinese, and became the theoretical basis for the appearance of TCM. The theory and clinical practice of TCM, including the understanding of psychology, pathology, disease prevention, treatment and recovery, fully developed from the theory of Yin and Yang.

Fuxi discovered 9 acupuncture needles – Fuxi is a legendary founder of acupuncture. According to tradition, Fuxi is the founder of 9 types of needles which are used in Chinese acupuncture: 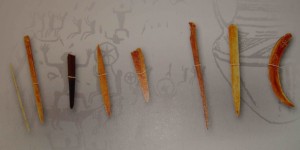 Picture 1: Acupuncture needles from the Neolit

During the Stone and Bronze Age stone tools have played a major role in human society. The Bian stone is one of the earliest surgical instruments. It is a thin tool with a sharp point or blade, which was primarily used to open the boil, and drain pus and blood. It was probably used for therapeutic stimulation of specific points on the body at an early stage of acupuncture development. With further development, the Bian stones evolved into knives and needles. The Bian stones were also used for several thousand years after the end of the Stone Age. The primitive Bian evolved into stone blades and needles, which started to be made from bamboo, wood, bone, and later bronze, iron, silver and gold. 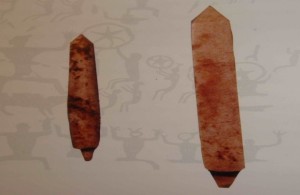 Sui Renshi – Chinese Prometheus: he discovered fire by the friction of wood. According to archaeological excavations, in the south of China in Yunnan province the traces of carbonized materials were found near the fossil remains of the so-called Yuanmou homin 1.7 million years old. The invention of fire is crucial for the development of herbal medicine, for the thermal processing of herbal medicines, as well as the activation and increase the efficiency of certain plants. Of course, MOXIBUSTIA (the stimulation of acupuncture points by increasing their temperature with the help of moxa wool made of moxa plant, ie. absinth) is directly related to the discovery of fire.

People in their original societies believe in deities, magic and rituals. The rituals were performed by shamans who were believed to have magical power to communicate with deities. Shamans had multiple roles: divination, sacrifices, prayer for God’s protection, prediction of celestial phenomena, medical practice, etc.

The development of the Chinese script shows the close relationship between shamanism and medicine. The hieroglyph for medicine 医 Yi used to include the radical (a part of the Chinese hieroglyph bearing the semantic meaning of the hieroglyph), denoting magic 巫 Wu. On the excavated cow shoulders blades and tortoise armors from the 1300 BC – 256 BC period, one can read that Chinese shamans treated the sick with the combination of traditional medications and magic rituals. Shamanic practices had two components: an effective medical treatment, as well as psychological support to the patient. 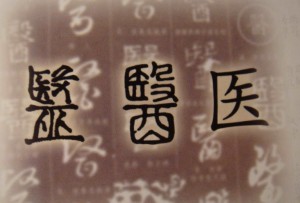 HUANGDI NEIJING –“The Canon of Medicine of the Yellow Emperor”: the theoretical foundation of TCM

The Spring and Autumn Period (770 BC – 476 BC) and the Warring States period (475. BC – 221 BC) were characterized by political instability and frequent changes of power. On the spiritual level, this was a flourishing period, since the free exchange of thoughts and ideas prevailed – “a hundred schools of thought” were created (many philosophical schools). Many great thinkers traveled through China’s vast territory, presenting their ideas on power, culture, politics, literature, art and everyday life. This medical treatise appeared at that time. This treasure of TCM consists of 16 volumes and 162 chapters. It is a compilation of numerous medical books, records and studies of diseases.

The key concept of the “Canon of Medicine of the Yellow Emperor” is the concept of holism. The greatest contribution of this book was to include philosophical theory into empirical medicine. By providing philosophical and theoretical structure for clinical practice of medicine, this canon got the status of TCM classics. “Neijing Tu” ie. “The Map of the Medical Canon” shows allegorically the anatomy of the internal human body organs, the flow of Qi (qi) energy through internal organs and the internal alchemy. 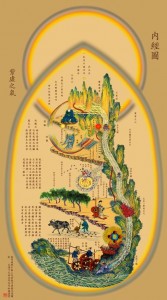 “Neijing Tu“, ie. “The map of the Medical Canon“

Although there are similarities between Western anatomy and TCM, the differences are much bigger. For example, according to TCM, in addition to pumping blood, the heart also controls the mind. The liver controls emotions such as depression and anger, as well as the retention of blood in the muscles and joints. The spleen is responsible for digestion and distribution of nutrients and body fluids throughout the body, as well as the regulation of blood circulation and prevention of bleeding. In addition to ejecting urine, kidneys regulate the growth, maturation and reproduction. These concepts of TCM have no parallels in Western medicine.

One of the basic theories of TCM is the theory of 5 elements. It classifies organs and functions of the human body into 5 main categories: wood, fire, earth, metal and water. There are 5 Zang (solid) organs (liver, heart, spleen, lungs and kidneys) and 5 fu (hollow) organs that are paired with the 5 Zang organs (gallbladder, small intestine, stomach, colon, and bladder). Each pair of Zang-fu organs corresponds to one element.

The relations of 5 elements and the human body

The body organs operate in a state of physiological interdependence in a complex holistic system. The disease is the result of the harmony disturbance of the whole body. Dysfunction of any organ affects the whole system through the process of feedback.

THE CONCEPT OF QI (气)

The concept of Qi is an inseparable part of TCM and Neijing, and represents the basis of the understanding of life, illness and treatment in TCM. TCM believes that the Qi is manifested in the following ways in the human body:

THE CONCEPT OF HOLISM

The concept of holism, ie. the idea that all aspects of the creation should form a single unit managed by the same laws, represents the foundation of traditional Chinese philosophy. The interaction, inter-governance, inter-dependence, dynamic equilibrium and mutual transformation of Yin and Yang, the two primary forces of the universe, as well as the creating and dissolving cycles of the 5 elements – are all different aspects of holism. Holism applies to TCM on 2 main fields. First, the organs, systems and functions of the body are viewed as an independent organ system. Second, pathological changes, diagnosis and treatment are treated as closely related with the forces of nature, such as the environment, the climate and the change of seasons. Holism is the foundation of all aspects of traditional Chinese medicine, including physiology, pathology, diagnosis, determining the type of disease, treatment and health promotion.